So, to make a start on my 2015 Vintage Pattern Pledge I am making a simple little blouse from some Floral cotton, that was gifted to me last year from a friend's stash, as well as a Vintage Maudella Pattern for a cute blouse with gathered detail at the center of the bust, that I can't recall where I got, probably at an op-shop

I have not had much luck working out the date for this pattern, but I would hazard a guess and say sometime from the mid 50's to early 60's. Maudella Patterns began in Yorkshire in 1937 and continued until they became New Look Patterns sometime in the 80's. Most of the ones I can find online are from the 60's and 70's, and they look much newer in the envelope design than the one I have. Actually, after looking around online, all the ones with the same font for the name are from the 1950's, so it's very likely to be a 50's pattern. I think it's nice to have a Yorkshire based Pattern in my collection, as My Grandfather is from York originally, and I still have family over there (some of which I caught up with when I was there last September)

Some of you may argue this isn't my first Sew of the Vintage Pattern Pledge, but as my Kitty Valentine dress was NOT made from Stash fabric, I have decided not to include it. I might change my mind if I get to the end of the year and I'm short of my pledge amount.

Originally I was thinking of replacing the zip with a decorative button on the back of the neck. But then I realised it is supposed to have a side zip, so I would still need something that created an opening to widen the waist (so I can get it on over my shoulders and bust) But as I would be wearing this top with a skirt with a zip, I really don't want a zip in the waist area of my top as well. So I thought, perhaps I could have buttons down the whole length of the back. While quite impractical, it does appear to feature on quite a lot in 1950's garments.

First thing with any of my Vintage pattern projects, is to grade it up to my size. I used the same method as I outlined in my previous post, mostly adding width at the side seams, and some in the center seams.

Then I pinned to my fabric and cut out the pieces, included a long thin strip to sew as button loops, and a little extra in the center back, to allow for seam/hem allowance (as it is supposed to be cut on the fold) 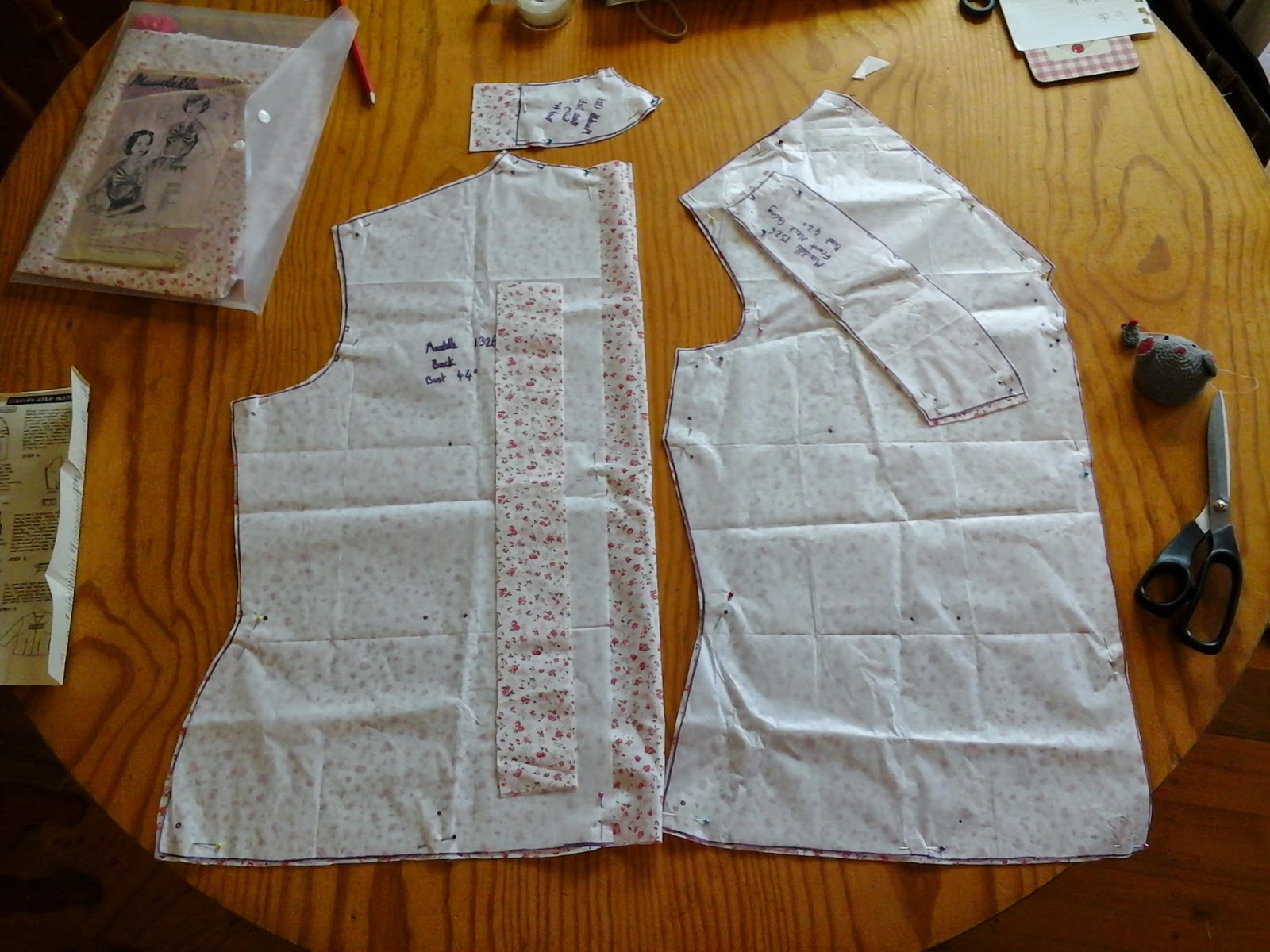 Then Packed the whole project away neatly into a Doculope so I didn't leave a mess all over the dining table while I was at work.

To begin with, I sewed up the darts and the neckline pleats on the 2 front pieces. I then pinned together the front center seam and pinned it to my mannequin to see if I liked it. I think the neckline is going to end up a little too high for my liking (which it did look like on the pattern envelope) and it may end up looking a little matronly. But I'm going to still sew it up as is anyway, I'm sure I'll get wear out of it (and sometimes it might be useful for me to show less cleavage....) 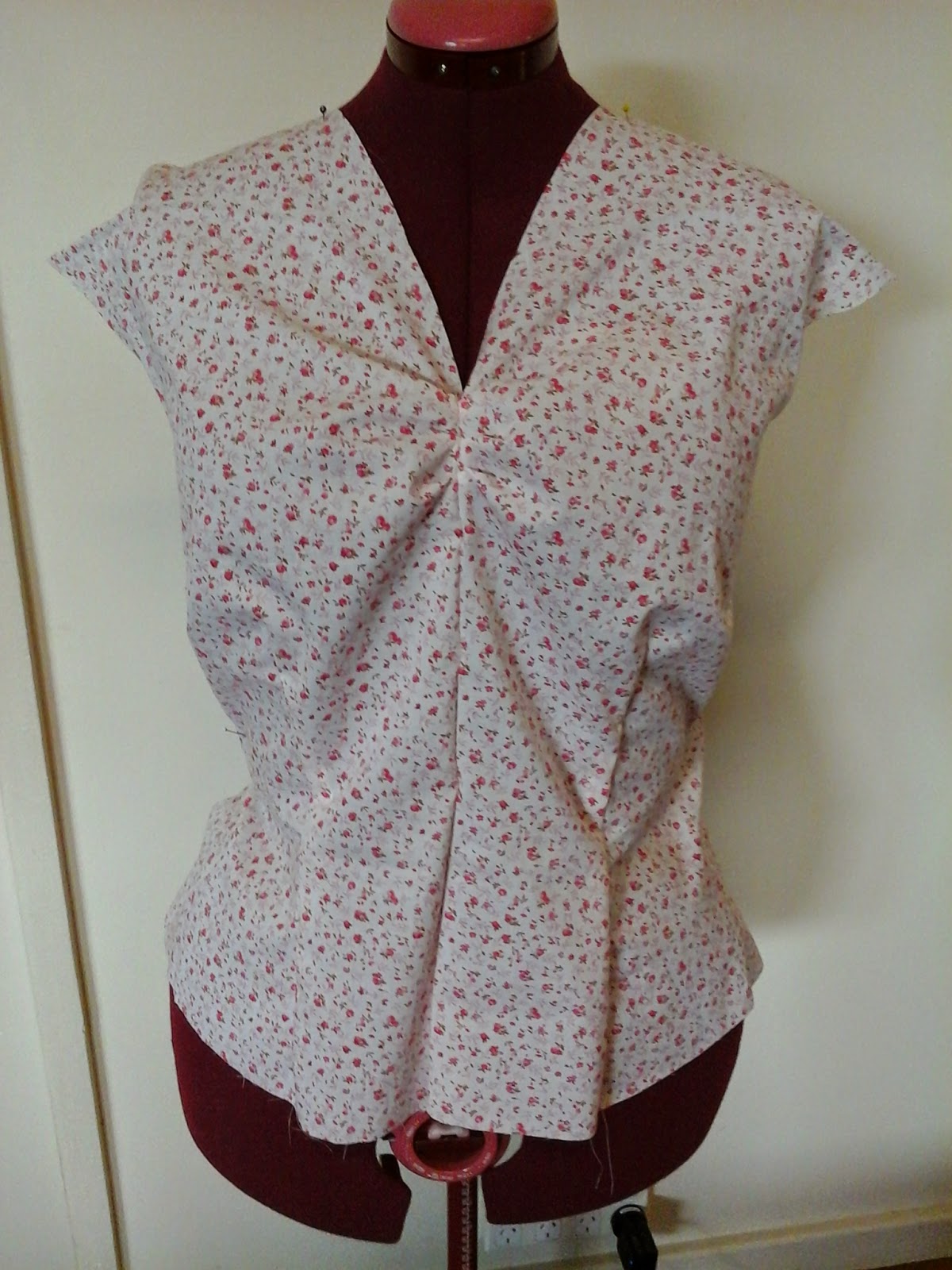 So next thing, I overlocked along the both sides of the front seam, then sewed them together (that way I can press it open) then sewed the darts in the back pieces, and sewed the fronts and backs together along the shoulders and sides (then overlocked over those seams) At this point this blouse got put on the back burner for a while as I worked on other projects.

When I finally got back to this project, I began again by sewing together the facing pieces, overlocking around the edges, then sewing the facing to the neckline. The edge that I just sewed then gets clipped at regular intervals, and the facing gets tucked inside and the neckline pressed


After trying it on with my new pants that I just made (Burda Style 6966) I decided to trim a bit off the shoulders, as they were sitting about 1-2" past where they should be. I also needed to trim about 1/2" off the bottom of the armscye as well (and grade between the 2 points for a smooth look). I made the same alterations to my pattern pieces for future reference.

As this is the sleeveless version, the armholes are then finished using Bias binding sewn on the inside (so you can't see it from the outside of the garment. I'm sure there is a technical term for it, but I can't remember it for the life of me. It is a technique I have also previously used on the armholes of my nightgown for the Vintage Pyjama Party Sew-Along.

To begin with, you sew the bias binding, right sides together, to your garment, like so: 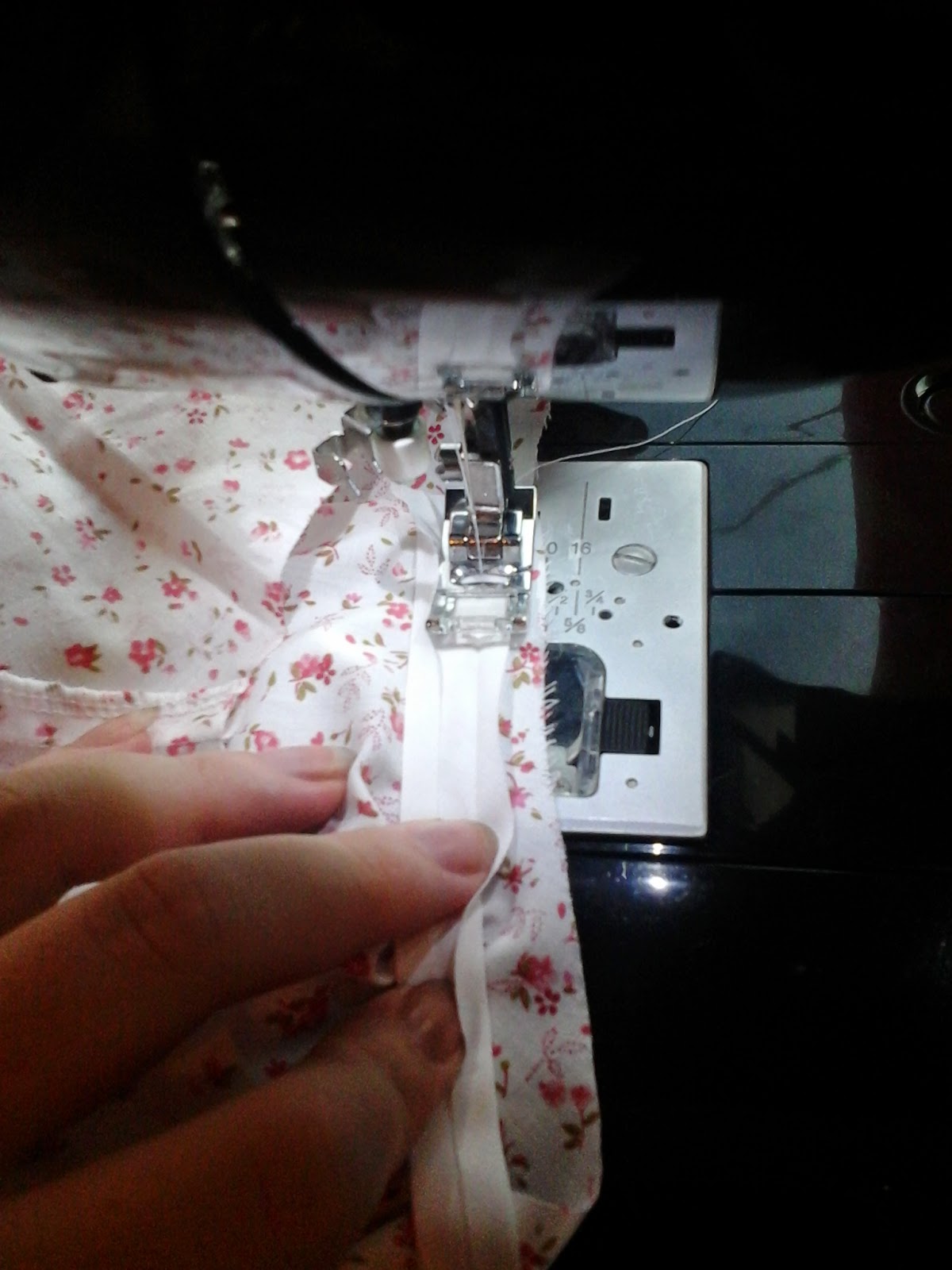 Excuse the dirty looking fingernails, I was very silly and didn't wear gloves when dying my Mother-in-laws hair, so they are all stained.

Then instead of turning the bias binding over to encase either side of the raw edge, you turn it so it is completely inside your garment, and the previous seam you sewed becomes the edge of the hem, as I've tried to show in the photo below: Next I thought I might run a basting stitch down the back seam, just to see how it fit and how far up I would need to place the buttons. To my surprise, the top still had enough ease at the waistline to fit easily over my shoulders and bust, but still have shape to it when being worn.

So I decided to forgo any closures at all on this top (as much as I love the buttons with this fabric) and sewed up the back seam properly, hemmed and pressed it.

I wore this top all day with a pair of jeans and the cotton was so lovely and light to wear. At first I didn't love where the neckline sat on me, but as I wore it, I began to like it more. Here's a few photos from the end of the day, enjoying a glass of wine at the in-laws place. It was pretty windy, and I have no make up on, but here they are anyway. 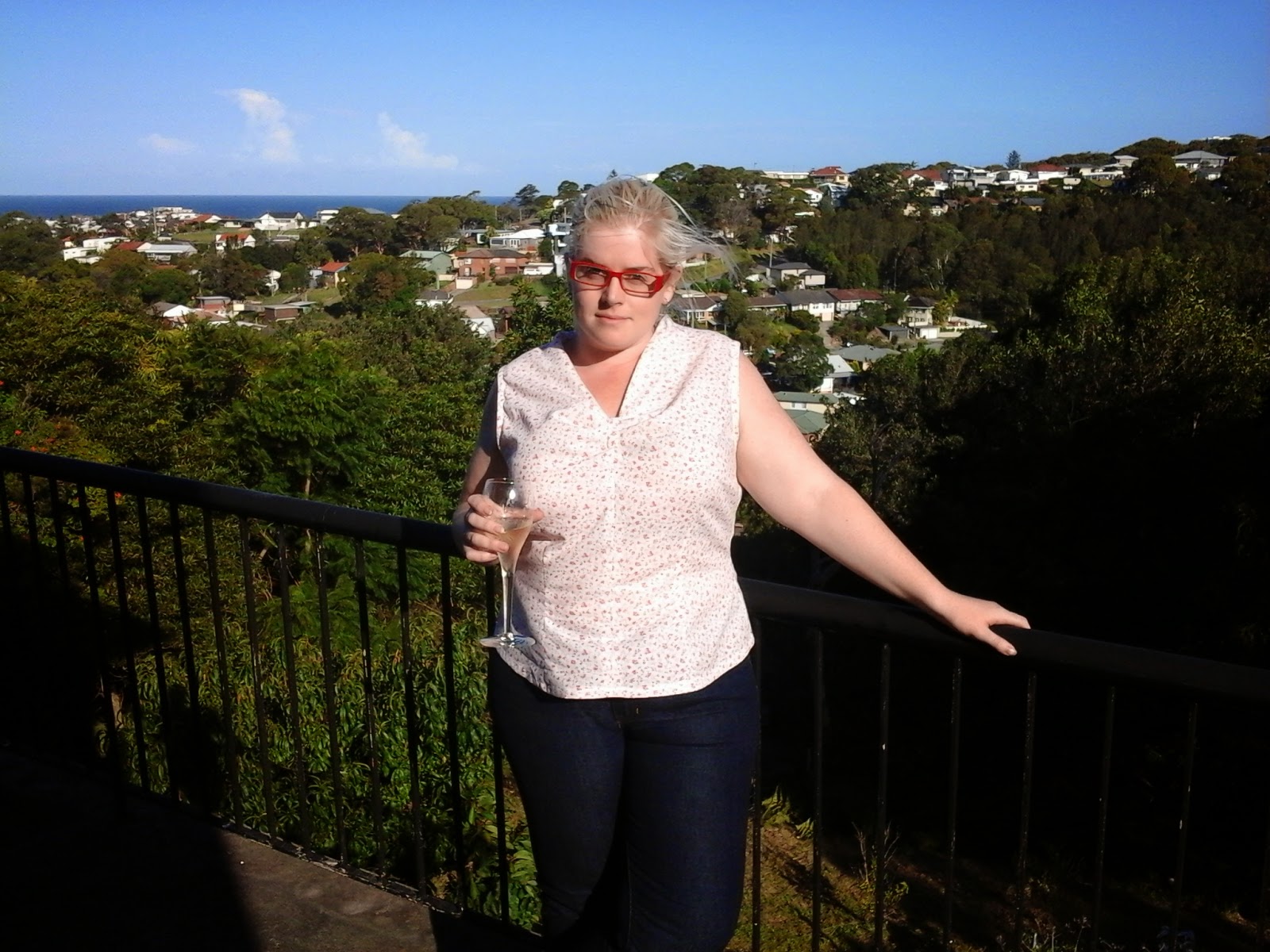 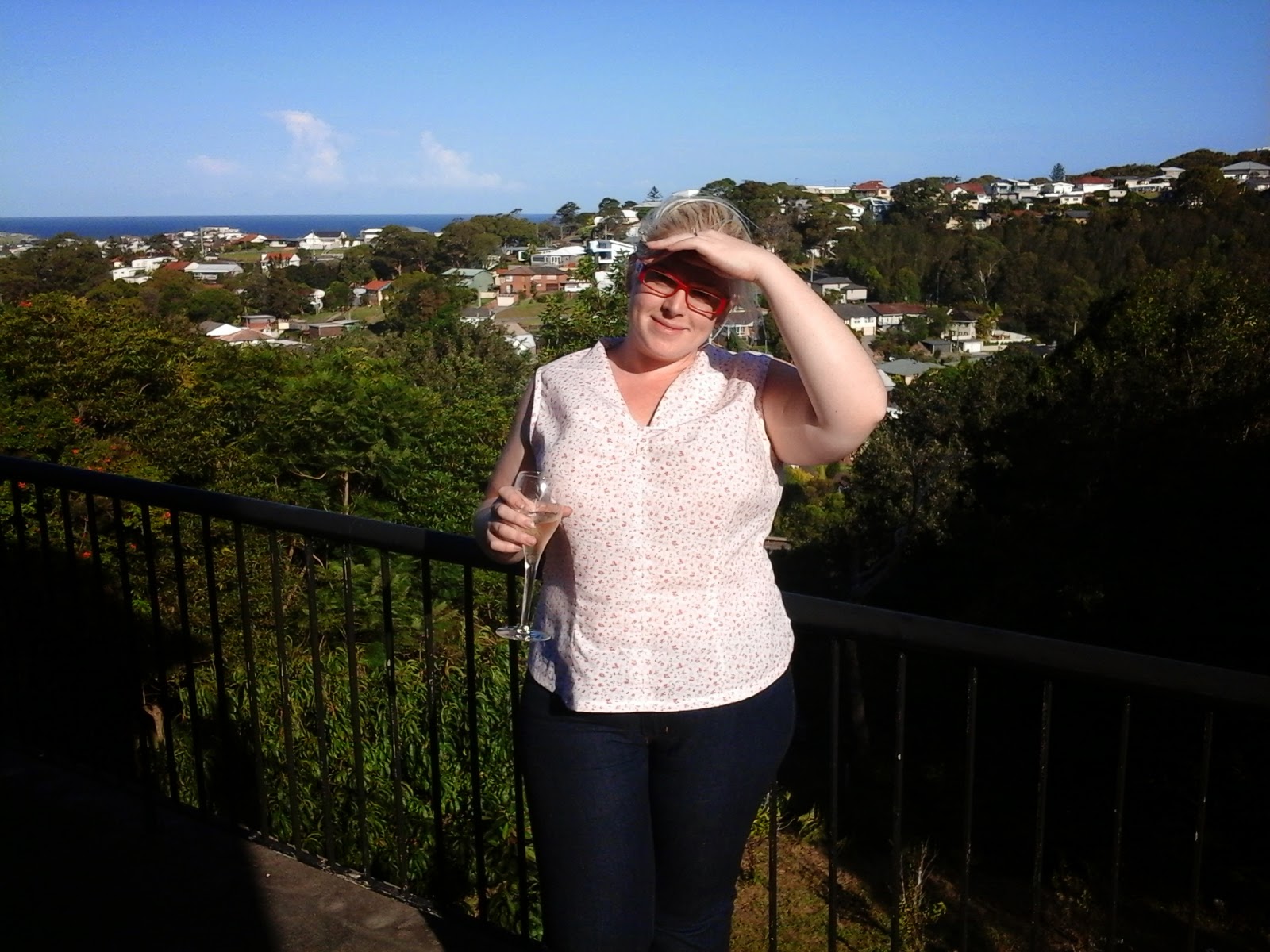 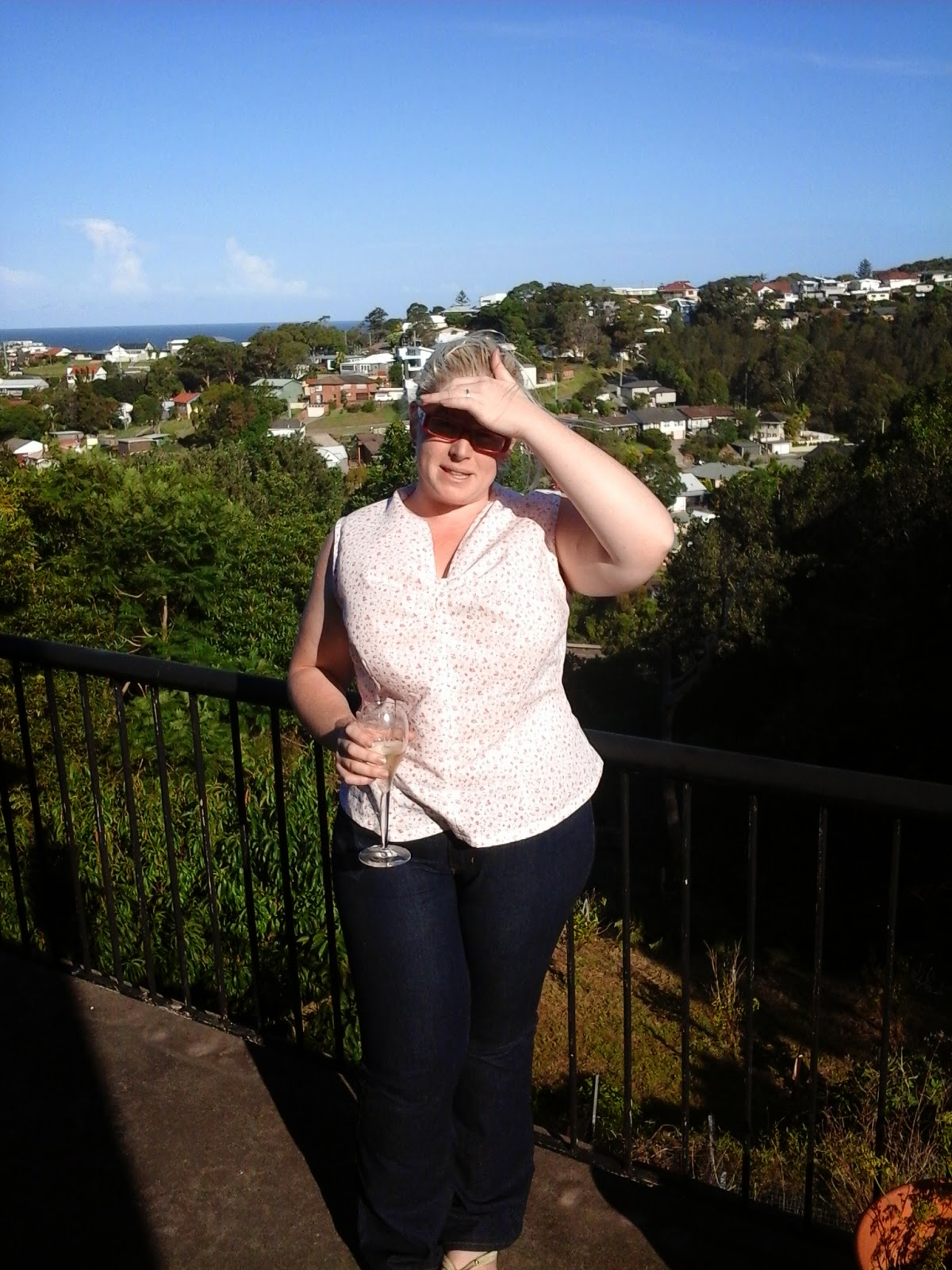 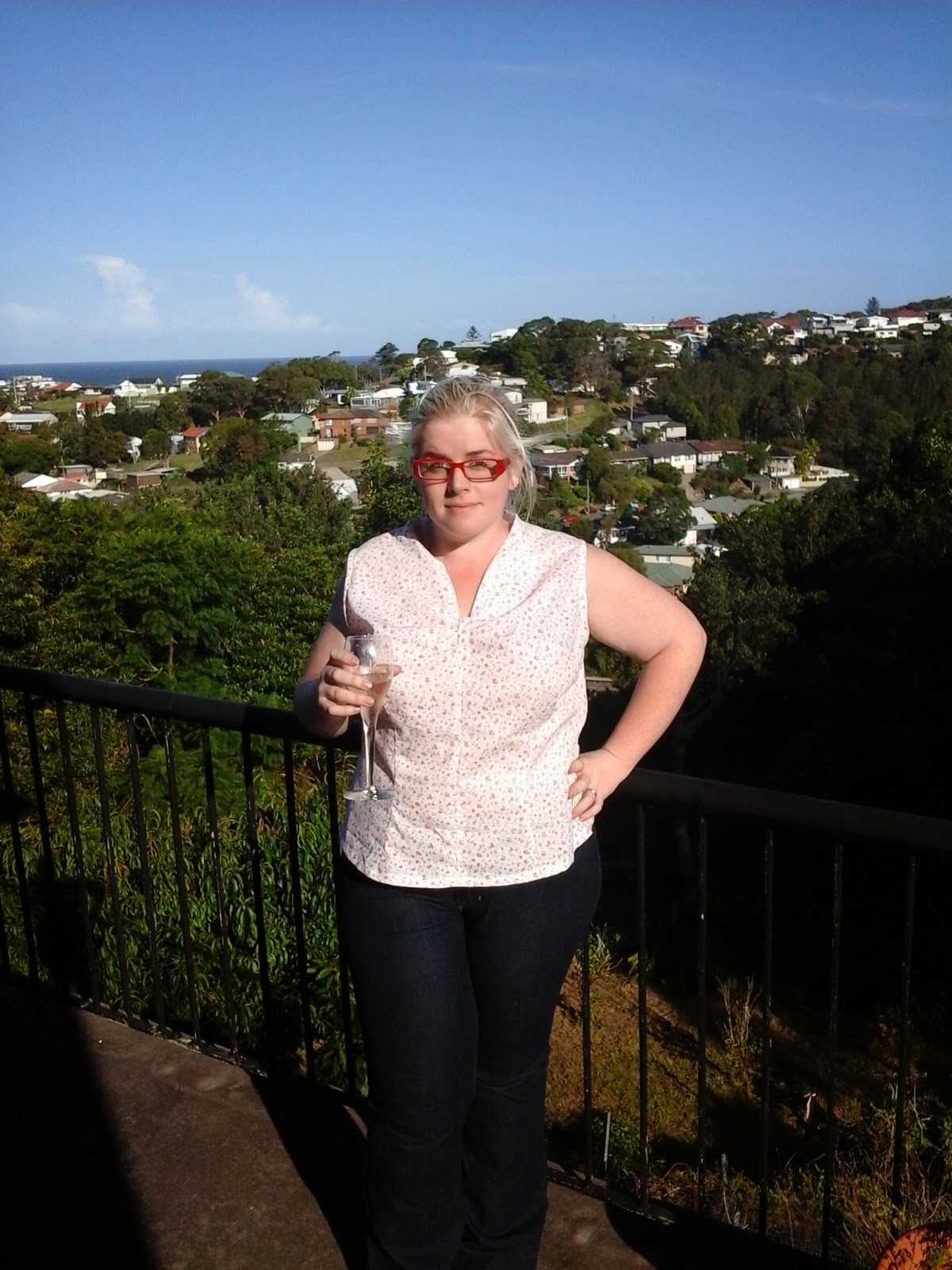 So now I can start planning my next Vintage Pattern Pledge Sew.