So I needed a white outfit for a White themed party. I had searched through my wardrobe, all the local op shops, as well as the local clothing stores and found nothing I liked.

And then my friend innocently suggested, why don't I make a replica of Marilyn Monroe's iconic White dress from the Seven Year Itch.

I admit it has been something that I have wanted to make for a long time, but have put off, partly due to the effort that would be needed for the pleating, and partly because there are already so many shoddy versions of this dress out there, that I didn't want to try until I could give it the time and effort it deserved to get as accurate as possible.

I do however have this book, Sew Iconic, which contains a pattern for the dress.

At first, I was pretty happy with this version, as it has the pleating and the multiple belt/ties at the midriff, so was a lot better than some other patterns to begin with. But I still ended up nearly redrafting the whole thing, to make it the way I wanted, but found it to be a pretty good base. I was initially pretty hesitant, as I couldn't find much in the way of reviews of the pattern itself, plenty on the book, but not how the patterns went together, but spent some time looking over the pattern, as well as pictures of the original dress and decided to go ahead, making changes as I went.

First up, the arduous task of tracing out the pattern pieces from the large, overlapped pattern sheets. This was awkward and time consuming, but not very difficult, as each line is made up of the initials of the actress who's dress it was, making it easy to discern between pattern pieces. 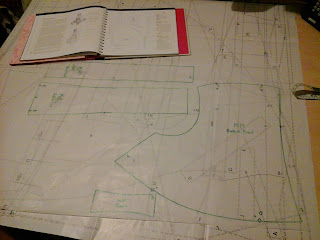 Next up is the grading up. This might seem like a drawback to purchasing this book, as all the patterns are one size, but as I am use to grading up my vintage patterns, this one was no different for me.

At this point I hadn't actually chosen a fabric..... I had nothing suitable in my stash, and couldn't find anything in town (I scoured the op-shops and even tried the sewing emporium to see if it was open, nope) Luckily, Lincraft was having a 50% off dress fabric sale, so everything hung on whether I could find some suitable fabric at Lincraft after work on Thursday (a mere 8 days out from the party! I decided on a lovely drapey georgette, that was only slightly sheer. which worked out at only $4.99p/m. 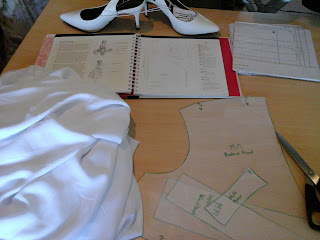 After looking very hard at many photos of the dress and at the pattern, I realised this pattern was actually only a basic circle skirt with pleats pressed in for decoration, the waist;line is not actually pleated when it is sewn up. Photos of the Travilla dress clearly show that the skirt was indeed pleated, so a regular circle skirt just wasn't going to cut it for me. It is very hard to tell if the dress was actually a circle skirt, as the pleats do not seem to get drastically wider at the hem of the dress, and in Travilla's pattern notes he does write "half circle skirt sunburst". Even though pleating a circle skirt seemed a bit daunting, I was worried that if I did make it a half circle skirt, that it just wouldn't have that delicious swishy-ness of the original dress, I mean what if by "half circle skirt sunburst" he just meant the pattern piece, and it was actually made with 2 of those pattern pieces? So I went with a large circle skirt, with a waist measurement 2 times my own, to pleat it in on itself. Travilla's notes mention that the skirt was 39" (although I now think that may have been the radius of the circle before the waist was cut from it) So to get a skirt 39" long with a waist measurement of about 72", I had to cut 2 semi-circles with a radius of 50 inches!!! Now as I hadn't thought all this out before buying my fabric, I only purchased 3m (the pattern calls for 2.5) so after cutting out only 1 side of my circle skirt, I ran out of fabric and had to make another dash to Lincraft to buy more. Normally I plan these things out better, but being in such a rush, I didn't think things through thoroughly, and this is what happens, wasted time and fuel. 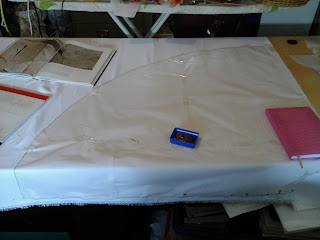 After getting both the front and back skirt pieces cut out, I turned my hand to the bodice pieces. From the original pattern, I Increased the width of each by about 3-4 inches, increasing the underarm section so that it wrapped further around the body than the one from the pattern. This pattern calls for gathering on the bodice pieces, but I really wanted the pleated look of the original dress from the movie, so I marked where I wanted the pleats and folded my pattern piece into pleats as a test. I quickly realised I needed more coverage on the underarm side of the bodice, and I also needed to extend the top of the piece to reach around to the back of my neck. 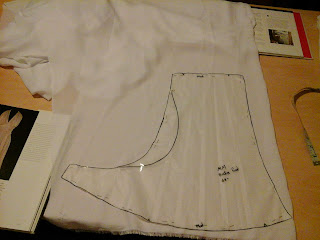 I began pleating the bodice pieces first, which was a complete nightmare, as they were small pleats, starting at 1/4 inch at the top and becoming 1/2 inch at the bottom. As the pleats were slight sunburst pleats, this meant most of them were not on the grain, so it took a lot of pins to hold them in place. 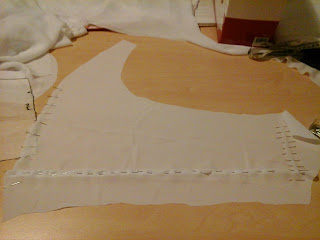 Each side was then pressed to set the pleats, using a solution of 1 part white vinegar and 4 parts water. I usually use a spray bottle of this solution when setting pleats, but when I tested this on a scrap, it caused a few little brown marks on the fabric. To resolve this issue, I had the solution in a bowl and dipped a pressing cloth, or in my case a scrap of white cotton, which I then wrung out as best I could and laid over the pleats and pressed with the iron on a wool setting. I pressed the first side with the pins still in the fabric, but this has unfortunately left the pinholes in the fabric. For the rest of the pleating I removed the pins in small sections as I went, and re-pinned the pleats only in key areas to keep all the pleats neat. 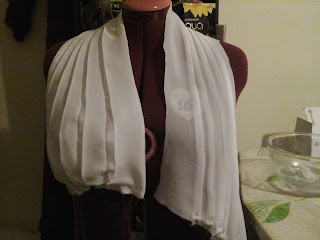 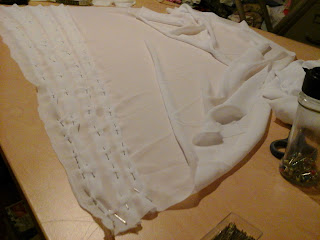 The pleating of the skirt pieces was a long arduous process, Using up nearly all of the brand new packet of 200 pins I had purchased for this project. I was initially going to try to measure everything and make the pleats as even as possible, but due to the bias movement of the georgette, that just wasn't going to work. Instead, I folded my skirt pieces lengthways a few times and pressed lightly to give me a few guiding sunburst lines, then proceeded to make the pleats in the fabric by eye. The pleats were supposed to be smaller at the skirt top, but things didn't quite work out that way, so when the skirt needed to be shortened a bit (as it ended up much too long) I shortened from the top of the skirt pieces so that they would fit around my waist without having to let out any pleats. 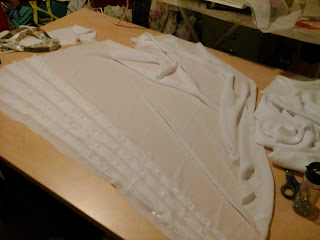 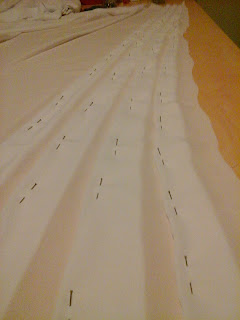 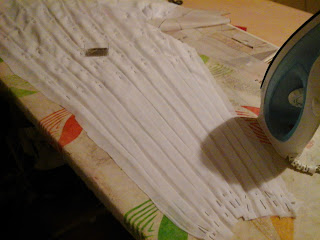 Here is one of the back skirt pieces half pressed, showing the drastic difference in the fabric once it is pressed. 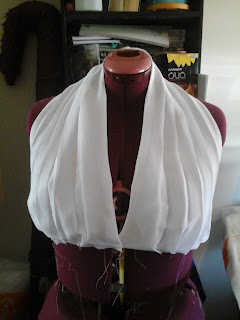 Once I had sewn the Bodice pieces to the bodice lining pieces (which I had hand drafted off the pleated bodice piece) and pinned both sides to the mannequin I was really happy with how it was turning out. 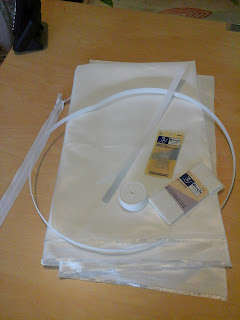 In order to get that really Marilyn-esque shape, I chose to add in a reasonably strong, tight, boned corset-like waistband. For this I used some leftover satin from my wedding dress, as well as a scrap of plastic boning and bias tape for boning channels. I had originally thought to include a waist-stay, but ended up not bothering with it. 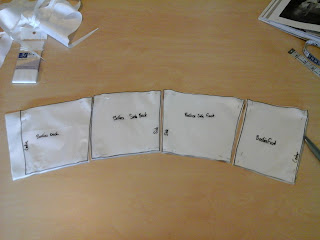 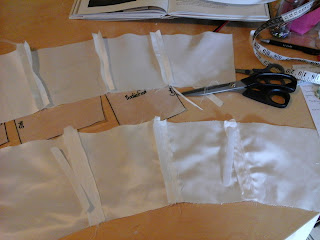 I used the same fabric for the lining and the outer, with the boning channels sewn to the outer layer. 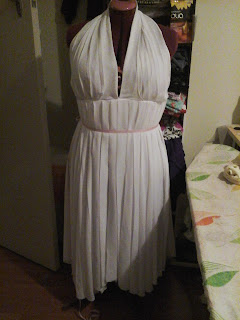 Once the bodice pieces and skirt pieces were sewn to the waistband, I put the dress on the mannequin and tied a ribbon around the waist to have a look at the silhoette, and I was pretty pleased. 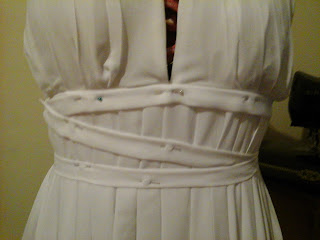 Strips of georgette then had to be sewn into long tubes, turned right side out and pressed, then cut to length and pinned and hand stitched to the dress, securing the pleats down, with the occasional stitch going right through the underlying corset waistband. 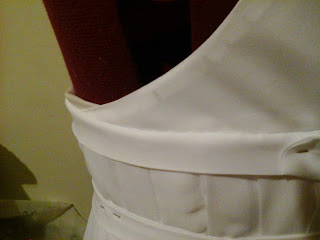 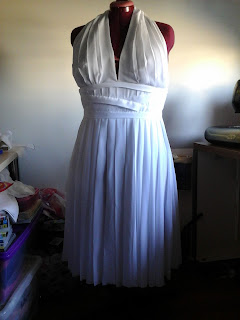 Once I finished the hand sewing I tried it on and took this quick selfie (I think it was around midnight) That waistband pulls me in nicely at the waist, which gives a very Marilyn-esque silhouette 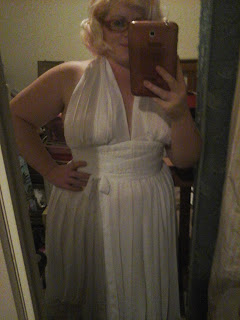 Then the next day I did the hem and she looked like this. I unfortunately didn't pull the ties tight enough around the dress as I was hand sewing, so the end result looks a little puckered, but I can always unpick and fix that at a later date. 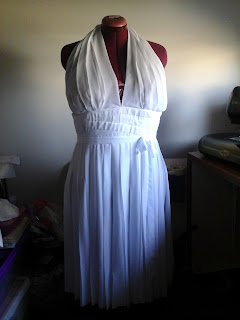 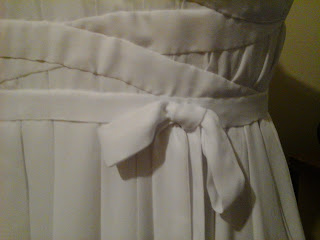 I just could not get the fabric to behave enough to turn the hem up twice, so I had to overlock the edge and just turn it up the once. However, I think that is a detail that only I am really going to ever notice.

I finished the dress on the Wednesday night, before leaving for the cruise on the Friday afternoon, Leaving only the Thursday evening to pack my bag. As I was packing my bag, I decided I needed a protective garment bag for the dress so it wouldn't get dirty or crushed, so I whipped up a quick one out of only slightly more than 1 meter of a lovely floral vintage cotton, that I knew wouldn't leech colour onto the dress. I think it only took me less than an hour to sew, and was a great use of a small amount (not enough for a dress) of vintage fabric. 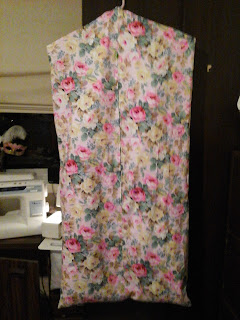 The garment bag ended up being just a bit short for this particular dress, so I won't be storing it in it in my cupboard, but was great for taking it with me on my cruise. Despite carrying it slung over my arm for the train journey and taxi ride to White Bay on a hot sweaty day, the dress inside was still perfectly wrinkle free when I took it out to wear later that night. This is probably mostly due to my fabric selection. I have since gently machine washed it at home, and the georgette was still wrinkle free and crisply pleated when I took it out from the washing machine and hung it up to dry. The same could not be said for the cheap satin lining of the bust pieces, but you can't see that anyway. 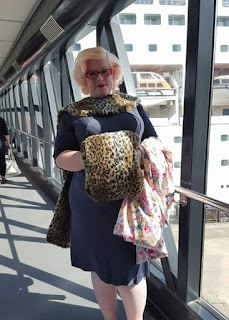 The Vintage floral fabric looks much nicer hanging over my arm than some ugly plastic garment bag. I may have to write up a tutorial to make garment bags sometime in the future.

I was hoping to have some decent photos of me wearing the White Dress before posting this, however it has already turned into quite a long post, so when I get them done I will just make a separate post.